Contributed by KUSF.org DJs and volunteers

Valentine’s Day can be tough, so it’s a good thing we have the people over at KUSF.org to make it better. Here are the breakup song picks from some of the amazing people behind USF’s student run radio station. Cry with us.

Evan Mclean
“Without You” by Spooky Black
Some songs just really pull at the heart strings, you know?

Maggie Silverman
“Emotion” by Samantha Sang
I used to have a radio show with my ex-boyfriend in high school and we had to continue doing it the whole year regardless of our differences and I thought it was super funny to play this song really loud in the studio and sing along to it to possibly make him feel more uncomfortable than he already was. END_OF_DOCUMENT_TOKEN_TO_BE_REPLACED

Vinyl enthusiasts and music connoisseurs alike gathered at KUSF.org’s first Rock ‘N’ Swap of the semester. Collectors and buyers came from all different generations and backgrounds, and arrived from various places for this all-day event. However, Rock ‘N’ Swap was more than just large collections of vintage records and oddities, crated and ready to be purchased. Both sellers and attendees shared exchanging stories of a mutual love for a certain record and playfully bickered over modern day music versus “the good old vinyl.” END_OF_DOCUMENT_TOKEN_TO_BE_REPLACED

Early morning on Sunday, September 8th, numerous vans rolled onto USF campus for 30th annual KUSF Rock ‘N’ Swap. The first KUSF “Sock” ‘N’ Swap was held off campus in 1983 at the Kabuki Theatre, when it was solely used for event purposes. Now held in McLaren Hall, KUSF has teamed up with local and nonlocal vendors to put together one of the largest music fairs in the city. This year, buyers came as far as from Japan to look at the collection, and vendors from San Diego even made an appearance.

Ann Averill, a junior and KUSF DJ, encourages students to come and check out what the event has to offer.  She said, “you’re going to be really surprised on how big it is. It’s almost like going to Comic-Con. It’s huge and it brings in a whole lot of people. It’s bigger than what you would imagine.”

Admission is free to students. Music enthusiasts can find discounted records, DVDs, posters, and tapes from every genre and musician. Doors opened at 7am and music lovers began filing in to get their hands on the rare merchandise found at this swap. Miranda Morris, coordinator of KUSF events, describes Rock ‘N’ Swap as an event where adults and students can come together with a common interest. She said, “this event definitely brings a music culture to campus in all sorts of varieties; whether its musicians, vendors, or collectors.”

Students can also interact and talk to the KUSF DJ’s who help manage the event. Morris hopes the Rock ‘N’ Swap will encourage other students to become more active with KUSF.

Rock ‘N’ Swap is held three times a year; the next one will take place in November. To get more information on the event or to be involved with KUSF, please visit their website at KUSF.org.

In spite of the sale, there is an estimate of 150 to 250 students filling out applications trying to get involved with the station. Bailey Onaga, a senior double major in fine arts and Japanese studies, said that she is most excited about KUSF being primarily student-run as well. “Whether you’re into The Smiths, Frank Zappa, polka, or whatever, we welcome students of all music tastes. The more diverse, the better.”

Who’s the FCC?- The Federal Communications Commission has the power to regulate frequency, power program content, and location in all 50 states, The District of Columbia and U.S. territories

Currently, KUSF is planning to be operated as an online only station very soon. Miranda Moore, coordinator of KUSF, said that the online streaming should be up and running on KUSF.org in the next couple of weeks.

The broadcast studio has been moved to Cowell 416. Originally the studio was located in Phelan Hall, and had been there broadcasting for over 35 years. According to Steve Runyon, KUSF general manager, the station has been streaming online since the 1990s.
In terms of the sale, Moore is very optimistic. “We definitely had to realize that the university made the decision and at the end of the day, I felt very strongly that I wanted to students to have some kind of station regardless if its online only,” she said.

Some of the positives Miranda mentioned for an online only radio is that there are no FCC regulations, and she feels that it would be less intimidating for students to get involved. “ A lot of students are hesitant to broadcast in front of 30,000 people but maybe broadcasting to 30-50 people isn’t so intimidating.”

Showing KUSF’s awards displayed in the office, Runyon said it has been frustrating going through the sale process. “KUSF was considered probably generally the best college radio station that ever existed. Awards from Schwarzenegger and the California Board of Supervisors…we had so much external recognition but that didn’t seem to matter when it came to being able to turn it into cold hard cash,” he said.

Runyon also said that he is moving forward with the sale, despite all the changes KUSF had to go through. “In May of 2011, our entire facility was torn out and most of it thrown into a dumpster, because in Phelan, they were renovating the floor,” he said.
At that point KUSF was offered a seminar room. According to Runyon, the university pulled the plug on financing KUSF, so there was no money to make any developments and progress.
After receiving enough funding from the university, Runyon said KUSF was able to rebuild their studio and has been moving forward to adapt to the changes.
“It’s progressing from the standpoint of getting students interested into a student station, which is what Father Privett wants. Hopefully it will work out for us, but it really depends on the interest of the students,” he said.

Moore emphasized that the important part with having great student involvement is having partnerships within the community.

In the next few years, KUSF will focus on working with students in the studio and getting professors involved in hosting radio shows. So far, members of University Ministry have already reached out to working with the station, according to Moore. She hopes KUSF will be able to partner with the athletics department in the future.

“We have been really excited with the possibilities of all the positive community building KUSF could be a part of within USF’s community while exposing others to new music, USF academic and culturally enriching lectures, sports…and so much more,” Moore said.

Onaga also shared the same difficulties in accepting the sale, but is looking forward to KUSF’s future. “At first it was difficult coming to terms with the sale, but now enough time has passed so I am able to see this as an exciting new beginning. KUSF will never be 90.3, but I’m really positive for KUSF.org and am grateful for the experiences I’ve had.” 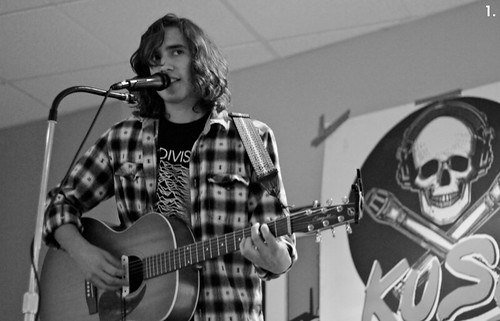 Last Thursday, KUSF hosted a very successful Late Nights @ Crossroads event with the anti-establishment pizzazz that one can expect from our late and great USF radio station. Rest in peace, dear sweet KUSF FM 90.3, but the USF music scene isnít going down without a fight.

The event was a showcase of USF musical talent, featuring Sir Taco and the Shells, Conor Oberst reincarnate Nik Pilgrim, the superhot girls-with-guitars of Bad Asteroid, and the punk rock shenanigans of Dead Set.

The show boasted a large turnout of USF students. Armed with KUSF t-shirts and many a Manic Panic dyed hair-do’s, patrons of all ages and music tastes danced the night away to USF’s homegrown music.

“We were trying to show KUSF as an entity at USF, not just a radio station,” said KUSF’s Michelle Rizzio, who was in charge of putting on the event.

Since KUSF was abruptly sold by the USF administration last year, KUSF has faced a shaky presence as an exclusively online radio station.

As for the future of KUSF, even Rizzio seemed unsure: “We are planning to release a zine as a creative outlet for people to say whatever they want to say. It may be unaffiliated with KUSF, but it will be run by the same people,” said Rizzio.

As the show went on, the last act of the night, Dead Set, stirred up some controversy with the administration. As the crowd got riled up, mosh pits began to break out, causing safety concerns.

Lead singer Conor Crockford performed pointed, politically charged lyrics that seemed to offend some members of the Student Leadership Engagement. SLE shut down the event 20 minutes earlier than scheduled, upsetting many of the students.
“To the administration, I say ‘Shame on you.’” Said Crockford shortly after his set was cut short. “For the future of KUSF I hope we can get back on the air to serve the underground rock bands.”

Despite some altercations, KUSF efficiently controlled the crowd and wrapped up the event early. The event was handled successfully as a tamed-down, Jesuit-friendly version of a real punk show.

Dylan Tonti, director of Late Nights @ Crossroads, stated, “It was great to have KUSF’s presence on campus again. I feel the school seems out of touch with what kids are really doing with their time. This was one of the more successful events that struck a chord with the student body.”

Really, I couldn’t agree more. In my two years at USF, I felt that this was the first school event I have ever attended that truly created a sense of community within our university.

It brought me back to my high school days of donning Doc Marten’s, dyed red hair, and too much eyeliner and moshing to my friends’ death metal bands in the high school gym.

Honest local music brings people together, and KUSF gave us a chance to experience that here at our very own Crossroads at USF.

To get involved with Late Nights @ USF and the USF music scene, swing by Crossroads Café in the 1st floor of the UC Building every 1st and 3rd Thursday nights of every month.