It’s almost that time of year again:  people are waiting on their cellphones and laptops for tickets to go on sale.  With so many concerts happening in The Bay Area, where do you start? Here are the concerts, festivals, and bands to rock out to this spring in the Bay Area and beyond. END_OF_DOCUMENT_TOKEN_TO_BE_REPLACED 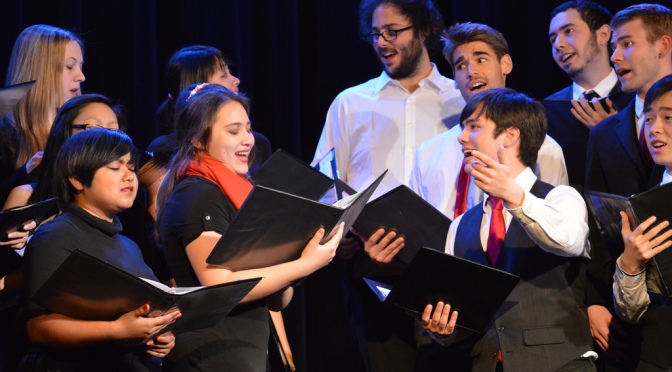 It was a week of performance – from dance, music, to a capella singing, PASJ hosted a variety of shows and events to celebrate all that the Performance Arts & Social Justice Major had done. On November 25th in the Presentation Theater, Voices, USF’s largest campus choir group, celebrated the success of their 25th season. With an almost full auditorium, the show garnered a great turnout and audience members showed enthusiasm and pride for their friends, classmates, and fellow students.

The introduction of the show began with an angelic entrance of over fifty Voices members. The concert included performances by different subgroups within the larger choir. Some standouts included the Women’s Voices second piece “Prayer of the Children,” led by student conductor Keala Frietas. This piece showcased the range and talent of the Women’s Voices group.

Another crowd favorite that received roaring applause was the Men’s Voices rendition of “You’re a Mean One, Mr. Grinch.” Not only did this fun piece bring the holiday spirit to campus, but it also brought laughter amongst the crowd as a choir member wore a Mr. Grinch mask and pestered the singers as they performed. Sophomore Dominic Lizama said, “After hearing all the Voices together, I thought the Grinch song was the best!”

A personal favorite of the night included a percussion piece featuring Francesca Rivera. By incorporating percussion from a different part of the world, the piece was unique, catchy, and danceable.

At the end, it seemed as if they saved the best for last when international student Mengyao Wang blew away the audience with her singing during the finale song, “All I Want for Christmas.” After her solo performance, the audience immediately began cheering and the enthusiasm for the upbeat number was kept until the end of the night.

After the show was over, Voices held a reception in the Education building and those interested in attending from students, family, to faculty, all enjoyed celebrating the success of the event. Altogether, PASJ’s Voices concert was festive and entertaining. We congratulate the Voices team on the show and the success of the 25th season!

In need of a study break? Here is a lineup of free upcoming events to check out this week. 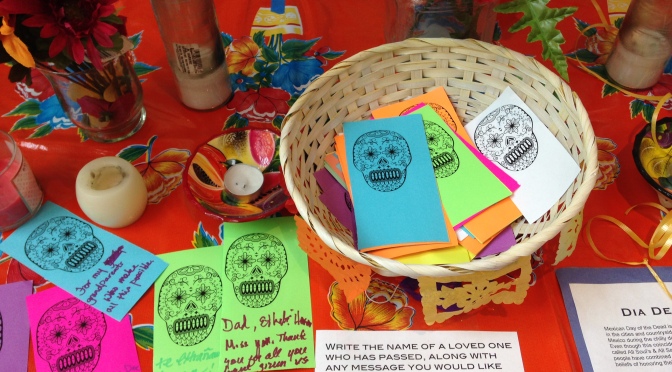 Día de los Muertos — “Day of the Dead” — is a holiday widely celebrated in Central and Southern Mexico on Nov. 1 and 2.

On the first floor lobby of Kalmanovitz Hall, the Intercultural Center has created a booth decorated with candles, papel picado (tissue paper banners), skulls, and vibrant colors to commemorate this special holiday. The tradition states that on the midnight of Oct. 31, the spirits of angelitos (deceased children) are able to reunite with their families during this time. On Nov. 2, the spirits of adults come down and enjoy all the festivities presented in their celebration. Ofrendas (altars), like the one in Kalmanovitz Hall, are decorated to ensure that returning spirits are able to celebrate with generations still present on earth.

You can check out the commemorative exhibit on your way to class, or you can participate in the holiday and write a little note to a loved one who has passed.

If you’d like to turn this celebration into a fancy evening out, Noir Lounge is hosting a dinner and ball to celebrate this festive tradition.

The San Francisco Symphony is celebrating the Day of the Dead with their sixth annual concert.

For art lovers, the SOMArts Cultural Center is hosting an exhibit featuring over 80 local artists and their work in remembrance of the day.

Are you a minority student interested in pursuing a career in health? If so, then this conference is a great tool that exposes a variety of health careers to over hundreds of students like you! 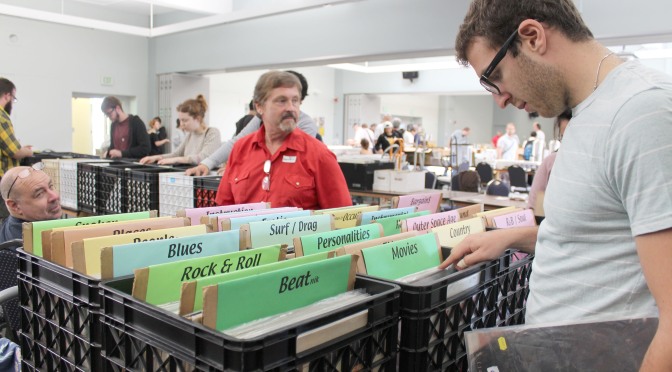 Early morning on Sunday, September 8th, numerous vans rolled onto USF campus for 30th annual KUSF Rock ‘N’ Swap. The first KUSF “Sock” ‘N’ Swap was held off campus in 1983 at the Kabuki Theatre, when it was solely used for event purposes. Now held in McLaren Hall, KUSF has teamed up with local and nonlocal vendors to put together one of the largest music fairs in the city. This year, buyers came as far as from Japan to look at the collection, and vendors from San Diego even made an appearance.

Ann Averill, a junior and KUSF DJ, encourages students to come and check out what the event has to offer.  She said, “you’re going to be really surprised on how big it is. It’s almost like going to Comic-Con. It’s huge and it brings in a whole lot of people. It’s bigger than what you would imagine.”

Admission is free to students. Music enthusiasts can find discounted records, DVDs, posters, and tapes from every genre and musician. Doors opened at 7am and music lovers began filing in to get their hands on the rare merchandise found at this swap. Miranda Morris, coordinator of KUSF events, describes Rock ‘N’ Swap as an event where adults and students can come together with a common interest. She said, “this event definitely brings a music culture to campus in all sorts of varieties; whether its musicians, vendors, or collectors.”

Students can also interact and talk to the KUSF DJ’s who help manage the event. Morris hopes the Rock ‘N’ Swap will encourage other students to become more active with KUSF.

Rock ‘N’ Swap is held three times a year; the next one will take place in November. To get more information on the event or to be involved with KUSF, please visit their website at KUSF.org.