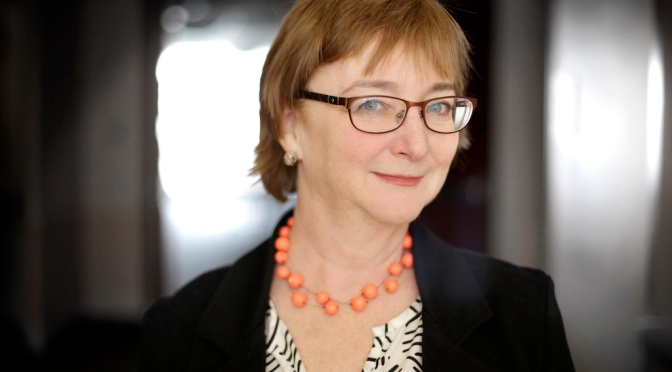 USF recently announced that Ellen Ryder, current Chief Marketing and Communications Officer at the College of Holy Cross in Massachusetts, will be moving across the country in May to join the USF community as the Vice President of Marketing Communications. She will be replacing Dave MacMillan, who was the first person to ever hold the position. MacMillan has been part of the USF community for 26 years and will be retiring this year.

Ryder was born in Massachusetts and received a liberal arts education from Wellesley College, where she earned her bachelor’s degree in English literature before attending graduate school at Northwestern University to earn a master’s degree in journalism. In 1992, after moving to New York, she instituted and pioneered the publicity department at GQ magazine and later served as the Vice President of Corporate and Public Affairs at Harper’s Magazine.

Ryder established her own firm in 1994 in Manhattan to represent authors, publishers, educational programs, and artists. She worked for publishers in New York for 15 years before moving back to her hometown of Worcester, Massachusetts. Her career at the College of Holy Cross was her first position in higher education. “It was a big change,” said Ryder, “I moved from private industry to education.” There, Ryder revolutionized the College Marketing and Communications department by implementing a new platform of communications within the college and to the public. Her experience in education is not limited to marketing and communications; she also taught a graduate course in magazine publishing at New York University.

Ryder has worked at the College of Holy Cross, one of the 28 Jesuit college and universities in the United States, for 12 years. Her duties at Holy Cross are similar to her duties at USF; she will be overseeing marketing and communications at USF such as print and online media, social networking, advertising, and market research. “I will be working with all internal and external audiences to make sure that everybody understands the messages of the college,” she said.

Anneliese Mauch, assistant vice president for marketing, was on the interview committee for filling the Vice President of Marketing Communications and got the opportunity to interview Ryder. Ryder’s experience in a Jesuit institution was a key component to her resume. “Her knowledge of Jesuit education really distinguished her,” said Mauch.

While Ryder is making a significant change in her life by moving across the country, she is happy to continue to work in Jesuit education; “It’s a move that comes in the right time of my career,” Ryder explains, “and a continuation of something that’s really important to me.” Although she has only visited USF a few times, she is eager to immerse herself in the USF community before making changes on campus.

Ryder has been in contact with her predecessor, Dave MacMillan, who has given her a great deal of insight into the position.  Prior to working as the Vice President of Marketing Communications, he served as the Vice President of University Advancement. MacMillan has also introduced her to the staff she will be working with and the goals of the office. MacMillan has informed Ryder of his 35-member team and the progress the office has made in communicating USF’s excellence. MacMillan has encouraged her to embrace the USF community. “I want to immerse myself in the important issues that are taking place at USF, listen to people, learn more about what’s happening, and apply what I’m learning to the strategic institutional goals that Father Fitzgerald and the trustees have for the University,” Ryder said.

Ryder will be moving from Worcester, Massachusetts to San Francisco with her two cats: “The cats and I have not talked about this move yet so we have to negotiate that,” she said. As for now, she is focusing on selling her house and finding a place to live in San Francisco. Ryder will begin at USF on May 16. “It’s going to be a great adventure,” said Ryder, “a wonderful place to work, and I’m really looking forward to being part of the community.”