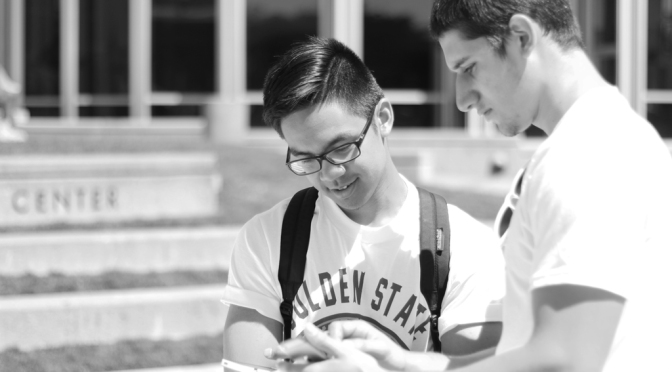 Tend is one of many startups that the eClub has partnered with in the past. As the coordinating club for MBA students in USF’s School of Business, eClub works to foster real world business experience. Startups like Tend help students at USF understand the world many of them aspire to be a part of while simultaneously promoting their product. Louis explained, “The Entrepreneurs Club working with Tend is the best example of what the eClub is all about; a group of entrepreneurial minded students working with SF/Silicon valley startups in a hands-on, interactive, and engaging way.”

Startups and social media apps will continue to emerge, pushed forward by creative and ambitious young people looking to fill a niche characterized by seemingly limitless opportunity. Organizations like eClub and startups like Tend have a great deal to offer each other. Louis sees her club’s work with Tend as a “collaboration that offers first hand experience to students interested in starting their own companies through seeing the daily challenges that inevitably arise, and ultimately overcoming them through experience.”

With previous experience at eBay and Goldman Sachs, brothers Tim and Mark Gernitis founded Tend with a vision. Tim Gernitis also recognizes the mutual benefit in working with student groups. “The eClub is helping us understand feedback from our first users at USF. We’ll use this to set the direction of our business.  It’s amazing to have USF students join us as literally our first users and have their input going forward.”

Based on the model of Yelp, Tend introduces a more social platform for restaurant goers. Tim Gernitis elaborated, “We’re making restaurant recommendations from your friends automatic.  It’s like Yelp, but you don’t need to leave reviews (or check-in) because your phone already knows where you go.” For many people, however, this fact is not beneficial, but rather intimidating and invasive.

Jeremiah Maller, a program assistant in the Biology Department at USF, is one of the people concerned about the use of location-tracking apps. “At first, the app sounded like a really cool idea and I thought, ‘Yeah, I will definitely try it out.’ Then I realized that all of my movements would be recorded and I’m not so sure anymore.”

The debate on privacy permeates many social and professional circles. The privileges granted to those in power in the name of our protection is one that extends from global to personal spheres. Apps like Tend, which use location tracking on one’s personal device, are central to this issue.

When asked to address this issue of privacy in regards to Tend, Louis responded, “The reality is, your phone already knows where you go. What Tend does with that information is simply make your restaurant search simpler and, in fact, more private than a check-in on a public site such as Yelp.”

While it may be surprising to hear that Tend may actually be more private than common location-using apps like Facebook or Yelp, Tim Gernitis corroborated this point; “Tend never shares your current location or location history, and favorites are only shared with friends on Tend. We actual founded Tend on the belief that the Facebook and Twitter broadcast-sharing style of personal location data was not consistent with user trust and privacy. That’s why we’re creating a new sharing model.”

A former USF student, Gabe Nikias, who was present at Friday’s event, commented, “the discussion of privacy can’t come down to one app alone, we use location-tracking technology constantly.” Nikias’ point begs an important question: Where does one draw the line in the sand? With Facebook, Yelp, MUNI, and many other common apps using location technology, a complete disconnect would require a drastic change in lifestyle for the majority of phone-toting individuals.

Gleeson Plaza remained packed with students long after the event had officially ended, and eClub members continued to discuss Tend with anyone who had a minute to spare and liked ice cream. Beyond the broader questions of social media and location tracking, eClub members were enthusiastic as they engaged with members of the USF community around them.