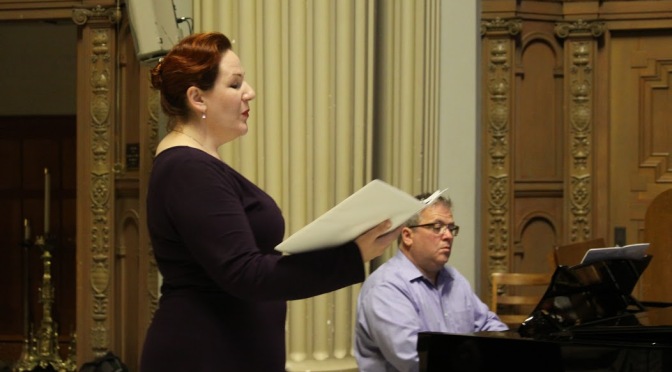 Alan Ziajka, organizer of the inauguration, said, “It will be worth going just to hear Cheryl Cain sing.”

Cain, who works as assistant to the dean in the School of Management, is a classically trained opera singer and will be featured performer in the St. Ignatius events.  One of the pieces she will be singing is  “Suscipe,” a  prayer of St. Ignatius of Loyola set to music by Rev. Louis Lambillotte, S.J. This song is a special request from the Rev. Paul Fitzgerald, who heard it when he was ordained in St. Ignatius Church in 1992.

The inauguration ceremonies will also include a new piece of music commissioned by Father Fitzgerald from Dan Schutte, the acclaimed Catholic composer.

She feels honored to have been asked to perform for the inauguration because she said this is “going to be a historic event.”  After having a good night’s rest, she expects to eat a good breakfast and have just enough coffee to be in tip-top shape for her performance.  Cain received her Bachelor of Music from the San Francisco Conservatory of Music and her Master of Music from the Manhattan School of Music. After spending several years studying opera in Italy, she returned to the United States, and has  performed  with the San Francisco Opera and the San Francisco Symphony.

Check out an audio story about Cheryl Cain and St. Ignatius Musical Director Paul McWilliams preparing the music for the Inauguration.