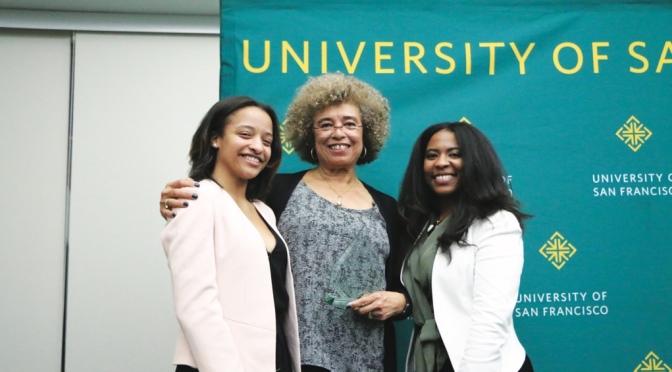 In 1970, political and civil rights activist Dr. Angela Davis was a professor in the psychology department at UC Santa Cruz, when an armed 17-year old high school student held up a courtroom and shot the presiding judge using several guns registered to Davis. She then left the state of California and became a fugitive after learning she was charged with aggravated kidnapping and murder in the first degree.

Davis was considered a “dangerous terrorist” by President Richard Nixon and was placed on the FBI’s 10 Most Wanted List. Two months later, the FBI found her in New York City and she spent 18 months in solitary confinement without a trial. After Davis’ imprisonment, thousands of people from all over the nation, and eventually the world, organized to get her out of prison. In February of 1972, she was allowed release with $100,000 bail, paid by a dairy farmer named Rodger McAfee. She was tried in front of an all-white jury and found not guilty.

In the following years, she returned to work as a professor and continued her political activism as she advocated for socialist ideals as well as domestic and international social justice. Davis continues to advocate for race, gender, sexuality, and socio-economic equality, and on Tuesday, Feb. 16, the USF Black Student Union (BSU) brought political and civil rights activist Dr. Angela Davis to campus for an exclusive presentation.

BSU president Sarah Toutant and her board worked tirelessly for months to bring Davis to campus, and the event was completely student-organized. After reaching out to Davis’ management and ensuring that she was free the night of Feb. 16, BSU struggled with acquiring the funds to bring her to campus. They turned to the Associated Students of USF (ASUSF) Senate.

Toutant met with the financial committee of Senate under the impression that she would be talking about Davis and the finances required to bring her to campus. However, some of the financial committee’s questions focused on the inclusivity of the event. “I know for a fact that they don’t ask that of any other organizations on campus,” said Toutant, “We’re bringing an icon to campus…it shouldn’t matter whether you’re white, black, asian, et cetera.” Senate had concerns that they needed to save money for other events, but raised their donation when Toutant shared that other on-campus organizations — such as the Critical Diversity Studies department, the Gleeson Library, and the McCarthy Center for Public Service — were sponsoring the event.

“[The inclusivity of the event] was not an issue that came up to the finance committee with Senate, that was an issue with PAT (Peer Advising Team),” said senior Patricia Kealy, VP of Business Administration for Senate. “That’s a question that’s asked of every student event because it is funded with student activity fee money because it needs to be open to the whole campus. No one on the committee had an issue with funding the whole event.”

Kealy also implied that the financial magnitude of this event required a deeper evaluation by Senate. “If a budget proposal is over $5,000, it has to go in front of the entire Senate anyways, and speakers at that price don’t usually come through Senate,” she said.

On the day of the event, a triumphant Toutant introduced Davis to the stage. She spoke on the black rights movement’s alliances with other social movements, even dating back to the institution of the 1882 Chinese Exclusion Act, as the New Black Labor Movement was the only organization to oppose the law. “Justice for one implies justice for all,” Davis said. Because of her involvement in the fight for global equality, Davis is particularly disturbed by the rise in the globalization of capitalism. She discussed how labor is cheaper in parts of the world where workers’ rights are less regulated, and the labor force does not have the resources to unionize. American companies exploit and capitalize on the vulnerability of impoverished foreign laborers. Internationalism is at the heart of Davis’ values, and she advocates for the rights of the foreign working class.

When Davis was asked to speak about racial inequality in higher education, she explained that when traditionally black universities were erected in the early 20th century, faculty, and administration tended to be white and oppressive toward the black student body.

Today, the struggle for racial equality in higher education continues. The amount of black students in college is increasing, but their graduation rates are 42%, compared to the 62% white graduation rate, according to The Journal of Blacks in Higher Education. This reflects the institutional racism within American universities. “Racism cannot be solved by colorblindness and avoidance,” Davis said, “We cannot solve this problem by forgetting about it.” Davis ended her speech with the idea that we cannot solve racism in higher education unless we “teach the teachers first.”

Davis’ speech was incredibly powerful and moving, especially given her intelligence and charisma. USF student Alexis Metcalfe was also moved by Davis’ presentation. “Hearing her speak about these issues was so inspiring,” she said.

USF freshman Toni Adeyemi said, “She said a lot of things that made me question myself and question her; there was that intellectual engagement.” For those who missed Davis’ presentation, it will be available online in the coming weeks. Check www.usfcabsu.com for updates.