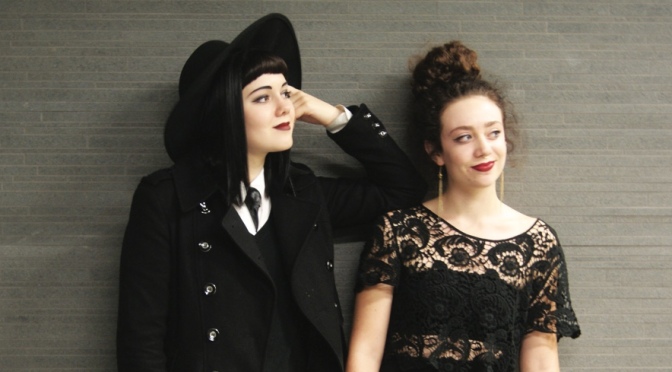 October is finally here and Halloween fever is in the air. As the weather gets colder and the leaves begin to fall, everyone is bringing out their dark, Autumn clothes. There might even be some spooky fashion flare around, like skeleton earrings or cobweb stockings. Or, just lots of black.

Though this might be a seasonal thing for most of us, for sophomore English major Shannon Lehr, all black clothing is her daily routine.

“I’m definitely committed,” she said about her dedication to a style she describes as “post-apocalyptic monochrome” that incorporates elements of Goth, Victorian, and a sub-fashion called “Strega,” modeled after the Italian word “stregoneria,” which is commonly translated as “witch.”

“A lot of the stuff that inspires me is usually fantasy, or other people’s creative styles of dress.” she said, running her fingers over the black resin surface of a raven skull attached to a necklace around her neck.

Her friend and roommate, sophomore communications major Maeve Donovan, who describes her personal style as “light-grunge-glamour-thrift-store,” sat beside her, beaming under burgundy lipstick and a top-knot of stubborn, dark curls.

“I started wearing black clothes to hide the coffee stains on my shirts.” said Donovan. Though Lehr “doesn’t wear colors, ever,” Donovan will sometimes branch out of grey and black. Her favorite piece of clothing is a “faux-fur cheetah jacket that looks like something a drunk aunt would wear.” For the most part, though, she sticks to thrifted dark colors all year round.

“I don’t think you realize how different you look until you leave San Francisco and go back home,” said Donovan. “You see more fashion in general [here] and so whatever you’re rockin’, people appreciate it.”

As welcoming and diverse as fashion in the city may be, there are still some setbacks that can accompany dressing “for a funeral” everyday.

“Yeah, we get asked that a lot. You walk into certain environments and people think you aren’t fun.” said Donovan.

“I think people are intimidated by me sometimes.” said Lehr. “I always go out of my way to be friendly. I’m a friendly presence, I like to have fun!”

Another thing that bystanders tend to assume, they said, is that because they dress “goth” they also identify with the subculture, which Lehr expressed to be born out of “rich, white kids rebelling.” The goth subculture is said to have started in 1980’s England during the gothic rock scene, a spin-off of the post-punk subculture. Though it may now be most notably known for the fashion, other elements such as music, art, and literature, are usually associated with it. Lehr, who doesn’t tend to share interests related to her fashion style, encourages anyone to dress in the style and that there “is no perfect goth.”

Their interests, which include everything from comic book posters to Lord Of the Rings paraphernalia, is something they consider to be “very separate from our fashion.”

“Our room,” said Donovan, “I don’t think [people] would match it to us.” Continuing, she explained how there is quite a lot that people think about their lifestyle because of how they dress.

“I think sexuality is a big part of it too,” she said conveying the way that people, particularly men, tend to assume that they are dressing “sexy” for attention or are “kinky.”

Regardless of some of these negative aspects, including people always asking to take their picture, wearing grayscale “felt like the right thing to do,” said Lehr, who began wearing black exclusively when she first came to USF.

“I have a goth for every occasion,” she said.

As far as Halloween goes, apparently you can do just about any costume with a monochrome twist as well. “We are going to be Babe-braham Lincoln and Hot Mess Jefferson,” said Donovan. Of course, the entire provocative presidential ensemble will be entirely without color.

The biggest benefit though? Laundry.

“I only do darks and my exercise stuff,” said Lehr. With only so much change to spare for washing, maybe we fellow students should all follow suit.